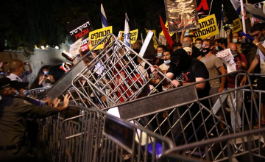 “HaGrap (HaRav Pinchas) Goldschmidt: ‘Today is a Historical Day for Israel and the Middle East’

* The president of the European Rabbinical Association, Rabbi Goldschmidt, who was among a group of Jewish people who were in contact with senior members of the United Arab Emirates, welcomes the normalization of relations: ‘We have proven that is it possible to overcome disputes and build bridges’ *

On Friday morning, following the announcement by President Benjamin Netanyahu regarding the historic agreement reached between Israel and the United Arab Emirates to normalise relations, Rabbi Goldschmidt, Rabbi of Moscow and the president of the Association of European Rabbis congratulated this step.

In recent years, the United Arab Emirates has maintained close relations with senior Jews from around and even displayed these relationships in the UAE.

Senior members of the UAE maintained direct communication with Rabbi Pinchas Goldschmidt, who sought to ensure protection of religious freedom and assisted him in the matter.

The Association of European Rabbis and the UAE also collaborated on joint programs in continental Europe on the issues of preserving religious freedom, maintaining security and promoting cross-continental processes.

In response to the announcement of normalisation of relations with Israel, Rabbi Goldschmidt said that, ‘This is a historic day for the State of Israel and the entire Middle East. We only hope that this is the first and that it will be adopted by other countries in the region – and we will be happy to participate and help in normalising relations with these countries as well’.

‘Our cooperation with the Prime Minister’s Office in the UAE, has proven that disputes can be overcome and in its place, bridges of peace can be built’.

‘We are happy to say that we planted the seeds that blossomed and allowed for Prime Minister Benjamin Netanyahu’s joyful announcement. For us, this is only the beginning, and we look forward to continuing this fruitful cooperation with UAE leaders who have emerged as true members and partners in our struggle for religious extremism and religious freedom’.”

Picture Source: Screenshot from a video that appears in the original article.
https://bit.ly/3fZIjvz